Why the Fed went nuclear with QE Infinity?

It took eight days for the Federal Reserve to go from QE of $US700 billion ($1.19 trillion) to unlimited buying of bonds to stave off an economic and financial crisis on 23 March 2020.

Forget the bazooka. The Federal Reserve has gone nuclear.
The embrace of QE Infinity by the world's most powerful central bank is a defining moment not only in this crisis but the history of central banking; a testament to the severity of the collapse in activity reverberating through the global economy and the financial system that sustains it.
With political incompetence writ large by the failure of the US Congress to approve a $US1 trillion-plus stimulus plan, Fed chairman Jerome Powell has stepped into the breach by signalling he will literally throw everything he can at efforts to buffer the free fall in the world's largest economy and prevent a global credit crunch.
But the historic commitment to unlimited quantitative easing – or purchases of government bonds and mortgage-backed securities – means the Fed has tacitly acknowledged that its efforts so far have not been enough. Far from it.
That the Fed went from unveiling $US700 billion ($1.19 trillion) in QE after an emergency Sunday meeting on March 15 to eight days later unveiling unlimited purchases to quell volatility in a malfunctioning US Treasuries market underscores the pace of a crisis that policymakers are struggling to catch up with and contain.

Reflect on these numbers. Of the $US500 billion in Treasury purchases announced on March 15, the Fed had spent $US272 billion by last Friday. Of the $US200 billion pledged in mortgage-backed securities purchases, it had bought $US68 billion.
At the rate of cash burn, QE Infinity seems like the only logical choice.
If the wisdom of the crowds is any measure, then Wall Street's 3 per cent overnight decline that brought the S&P 500 Index's fall from its peak to 34 per cent graphically illustrates the depth of worry about policymakers' ability to soften the blow from a crisis that looms as far more severe than the GFC. 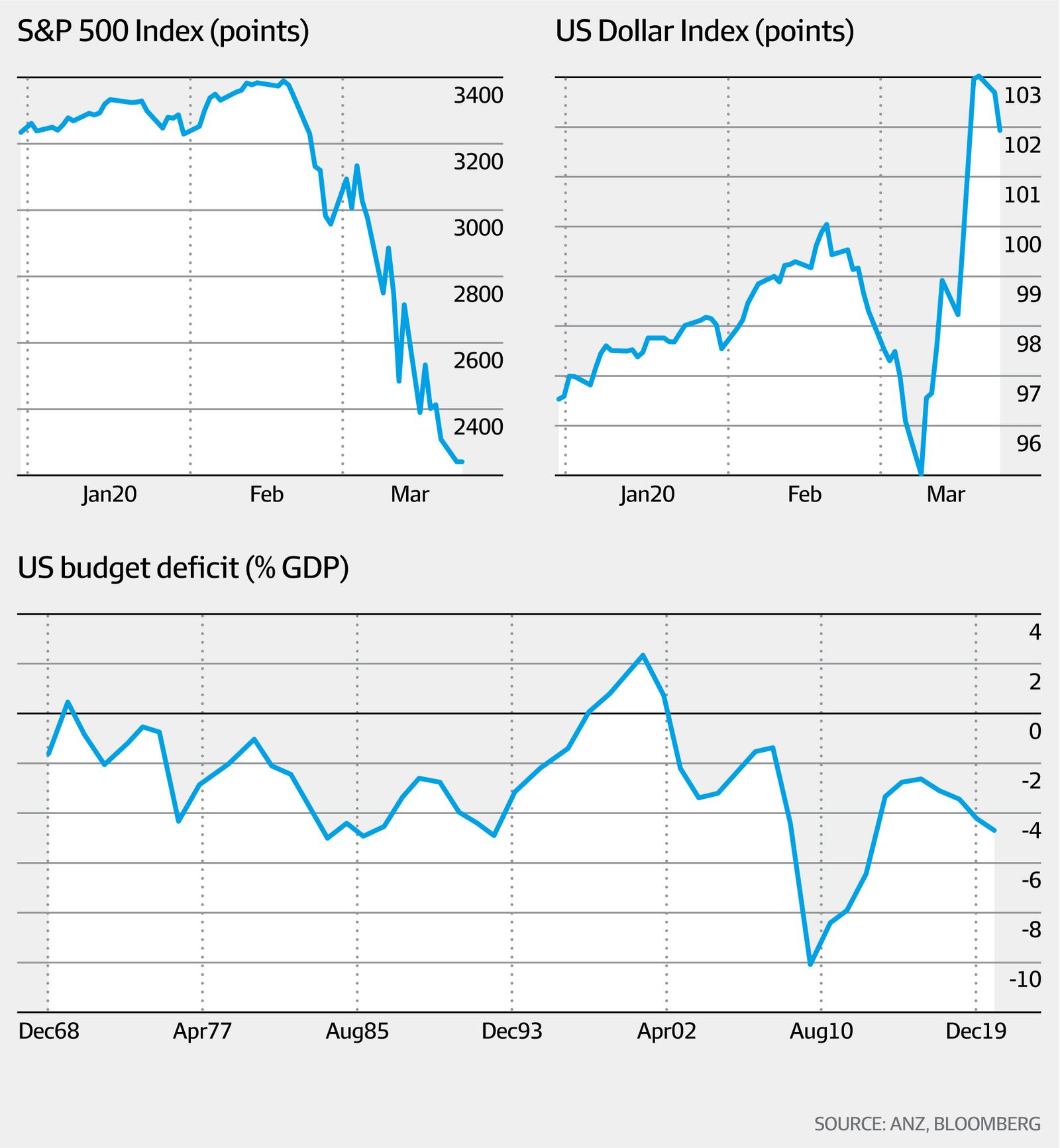 The growing number of funding facilities being launched by the Federal Reserve highlights the proliferation of stress points.

While the Fed is to be commended for understanding the clear and present danger, the need for these facilities highlights the accumulation of risk in the US economy – and the global financial system – from a complacency about benign economic conditions and easy access to cheap money.
Lessons learnt from the GFC? Zero.
The Term Asset-Backed Securities Facility is back after starring in the GFC, as the Fed seeks to keep the flow of credit running to businesses and consumers by buying debt like student loans and car loans.
Large employers also get to make their claim on the world's biggest balance sheet through the Primary Market Corporate Credit Facility and the Secondary Market Corporate Credit Facility.
Arguably the smartest move is the helping hand given to state and local governments through the establishment of a number of funding programs. 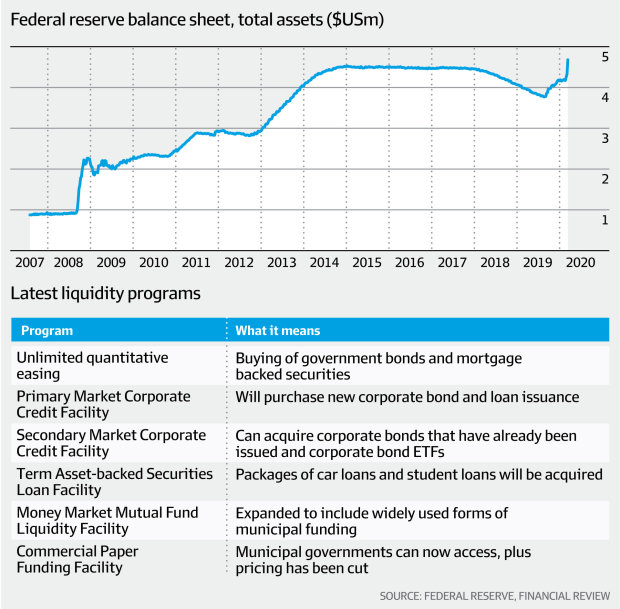 Why is this important? Because state government expenditures made up more than 40 per cent of government spending in 2019, which in turn accounted for more than a third of GDP.
State and local governments are also at the front line of the fight against the coronavirus and will need additional funds.

Infinity has its limits

The embrace of QE Infinity is clearly a groundbreaking move. But is QE Infinity limitless in reality? No quite.
Analysis done last week by Bank of America Securities shows the Fed could spend up to $US8 trillion.
The bank says the Fed holds 15 per cent of marketable US debt excluding bills, noting that it holds a large portion of debt with maturities of between 15 years and 22 years.
Noting the Fed's 70 per cent limit on holding each issue leads Bank of America to conclude $US8 trillion is the potential upside number.
However, the Fed is limited to $US1.5 trillion in US Treasuries with a maturity of 15 years or more.
At this point, the Fed has committed to not buy government debt in the primary market.
That means it won't buy debt freshly issued by the US Treasury, of which there is a likely tsunami coming given the big ticket stimulus set to flow through the economy once Congress gets its act together for the sake of avoiding an economic catastrophe.
But until that stimulus gets approved, the Fed is set to shoulder the responsibility to support the faltering US economy and a highly stressed financial system by itself.
But the reality is that unconventional monetary policy can't do it alone. The Fed can do a lot but it legally can't put money directly into the pockets of Main Street.
Source: Financial Review 24 March 2020
Robert writes on companies and markets. He is a former New York and Shanghai correspondent, and has worked in Hong Kong. Email Robert at robertguy@afr.com.au
Posted by 娜娜 NanaLim at 00:24 No comments:

It’s to infinity and beyond as the US Federal Reserve announces unlimited asset purchases to support markets roiled by coronavirus panic and an oil price war.


The Fed had already committed to purchasing $500 billion of Treasury securities and $200 billion of mortgage-backed securities, but imposed no limits on the swathe of new measures it announced on 23 March.

“The Federal Reserve will continue to purchase Treasury securities and agency mortgage-backed securities in the amounts needed to support smooth market functioning and effective transmission of monetary policy to broader financial conditions,” the Fed said in a statement.
That effectively means that the Fed is willing to engage in large-scale asset purchases for as long as it takes to set markets straight. It will also significantly expand the range of that program to include corporate bonds issued by “investment grade US companies and US-listed exchange-traded funds whose investment objective is to provide broad exposure to the market for US investment grade corporate bonds.”
The Fed’s previous actions – including the multitrillion-dollar expansion of its overnight repo program – have done little to calm markets amidst uncertainty over the coronavirus outbreak.
“The Fed has thrown another lifeline to markets and the economy as the COVID-related disruption continues to ripple through the system,” said Anna Stupnytska, global head of macro at Fidelity International.
“As its earlier interventions failed to abate severe stresses that have emerged in both US Treasury and mortgage-backed security (MBS) markets, the Fed has now pulled out the ultimate card – QE infinity – committing to unlimited purchases of government bonds and MBS. In addition, a number of new lending facilities have been unveiled, aimed at supporting the US corporate sector and households. This includes an unprecedented step to buy corporate debt – something other major central banks have done since the last crisis, but the Fed had so far managed to avoid.”
Further measures include the reopening of the Term Asset-Backed Securities Loan Facility (TALF), which will enable the issuance of asset-backed securities backed by student, auto, and credit card loans, as well as loans guaranteed by the Small Business Administration (SBA).
“The coronavirus pandemic is causing tremendous hardship across the United States and around the world,” the Fed said.
“While great uncertainty remains, it has become clear that our economy will face severe disruptions. Aggressive efforts must be taken across the public and private sectors to limit the losses to jobs and incomes and to promote a swift recovery once the disruptions abate.”
Posted by 娜娜 NanaLim at 00:14 No comments: 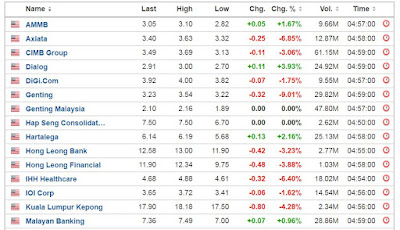 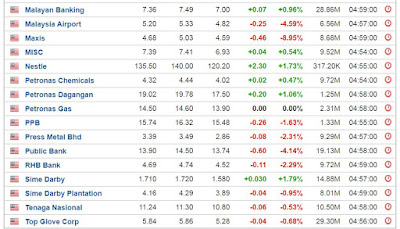 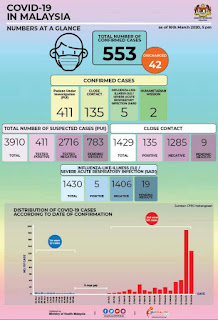 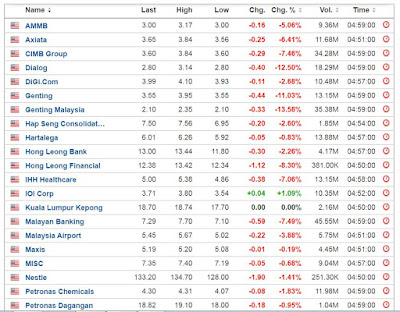 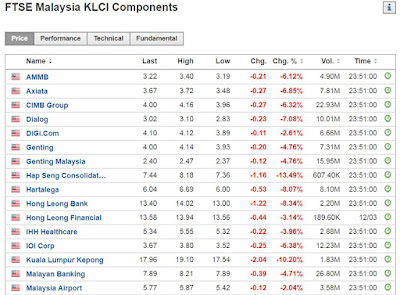 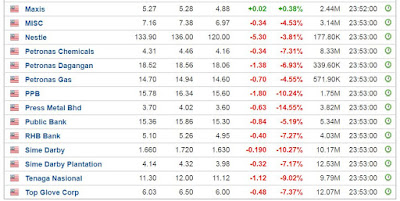 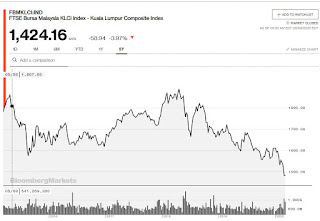